Probably the best May ever

As said, during May 2013 the E layer has been extraordinary active and there have been several conditions which have been especially favorable for Central Finland, which is an abnormality in a positive sense!  JVA, a colleague FM DXer from Oulu, has written a very good compilation of this May reguarding the situation in whole Finland! Good work! Have a look at his blog.

Above can be seen a picture originally from Visual Log Book consisting all the stations captured here in Uurainen, and also another picture and an audio clip, which both help a lot of being still keen on reporting.. Sometimes radio stations really seem to appreciate the reception reports concerning the Sporadic E reception in the middle of nowhere.. in a remote village called Uurainen…

LISTEN TO THE INTERVIEW ON OMROP FRYSLAN HERE 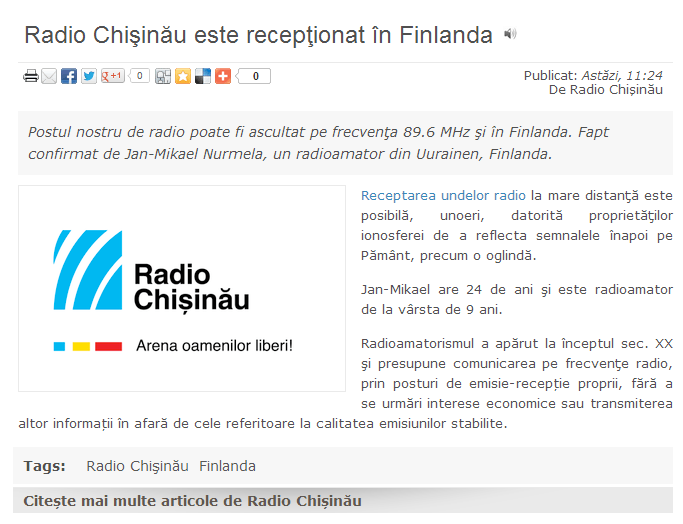 Here are coming some logs visually for everyone and in the text mode for Finnish speakers. Mademoiselle Essi has continued being active in last days.

Sporadc E activities in May 2013

Since we have many international followers (prima di tutto siete italiani, credo???), this blogging will be written in (bad) English. (Potete comunque lasciare i commenti in italiano ed io ci risponderò sicuramente!!). Since the end of April the E layer has been very active and the conditions have been favorable surprisingly for Finland! In the average summer the first opening take place in the end of May (between 20th and 31st) and they are audible mostly in Southern coast of Finland, but this year we have had little openings, that early, also in Central Finland and even closer to the Arctic Circle (Oulu region!). In addition Sporadic E conditions have been an almost daily thing since the Mayday! I think this is a real extraordinarity, or at least a special character. We are afraid that the rest of summer might be worse if we got everything in one month..

Below please find some of my audio clips from this year, if you are interested in what we can get here in 60 degrees north and even more!! You are welcome to listen to them.

Acik Radyo, Istanbul In my ears he shouts ”Acik Dai” but there was a RDS code visible and the stations friendly reply in Turkish(!) told that the jingle I heard is ”Acik Dergi” which is their program name. Now it is clear also to me!