Last two days have not been favorable for Central Finland. On Friday just some stations were teasing on lower band. 89.0 Yumor FM surprised with local weather for Krasnodar region. During this local break ID was ”Radiokanal FM Plyus” but the station is already QSLed, so Friday didn’t bring anything new. On Saturday I took part Finnish DX Associations board meeting. Guys told me, that there was continuous trying on low band, but the conditions never really started. Anyway it was promising for today.

Sunday morning started with replacing old Yagi and it’s coax cable with new (used) 4 element Yagi. Troposcatter and meteors have sounded much weaker than usually and now the band sounds much better (troposcatter from Sweden and Estonia was normal and meteors were numerous). During test listening first ID came from Galgalatz in Israel (double hop +3400 km), so the new set is working pretty well! In the evening conditions opened till 108 MHz, mostly to Italy, but everything from Slovenia to UK was heard. My personal log will be updated here meanwhile I am checking recordings. 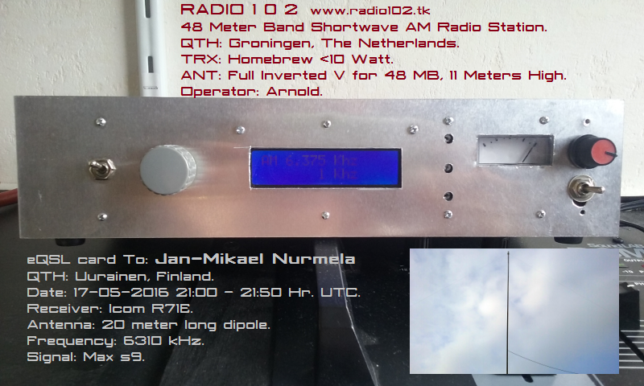