After a flop July ES seems to be activating little by little. On July 31, morning conditions offered some UKR and MDA on OIRT. Highest log was Radio Shanson with rolling RDS on 88.8 MHz. Next day continued with OIRT conditions to Komi. Conditions were good, also Radio Rossii transmitters listed as 100 W and 400 W were audible, but unfortunately there is nothing much to hear from Komi under 100 MHz. All signals disappeared around 0900 UTC, so I couldn’t confirm, if GTRK Komi-Gor has a regional bulletin from 0910 to 1000 UTC.. maybe next time!

On August 2, surprisingly good evening opening to Benelux and France up to 108 MHz for one hour, with some double hop to Spain! (NB: Could have been prelonged Tropo over Bay of Biskaya too!). Spain will be difficult to identify, but guys on South-Western coast had better condx towards Iberian peninsula! Only some of the Spanish signals reached inner Finland. From France mostly networks as France Inter, Fun Radio, MFM, Nostalgie and NRJ. From Belgium Radio Contact and a new-for-me network Joe FM. 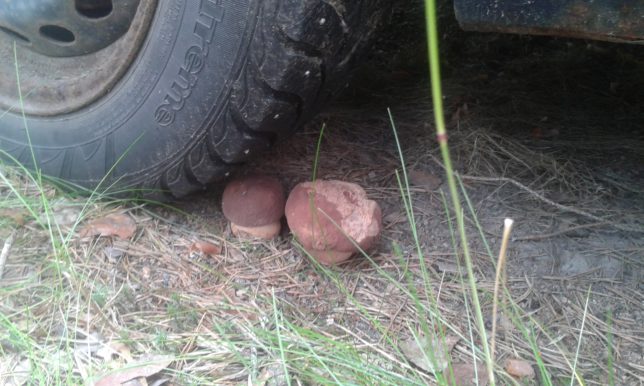 During inactive July many of us have found new hobbies: sailing, fishing, stamp collecting or picking up berries and mushrooms (it’s the best season now for them!). In this picture you can see some of 20-30 porcinos (penny buns) under my old abandoned Alfa Romeo, which seems to be optimal athmosphere for such a mushroom (enough humid and probably soon rusty!)

July 4th brought no conditions at all, but MUF was 108 literally next day, just after midnight on the South Coast. Unfortunately the best skip didn’t reach inner Finland, but some low band stations were audible for short time (i.e tentatively RAI 87.8).

July 5th, the summer meeting day started with 30 minutes OIRT conditions in the morning to UKR/BLR. A new-for-me station Svitle Radio Emmanuel 67.82 ided. Last time night conditions trigged super day June 8, this time we were expecting a little bit more than this, but even MUF 74 is good compared to MUF24.