The 1BCG Special Event: retransmission of Transatlantic Tests of 1921 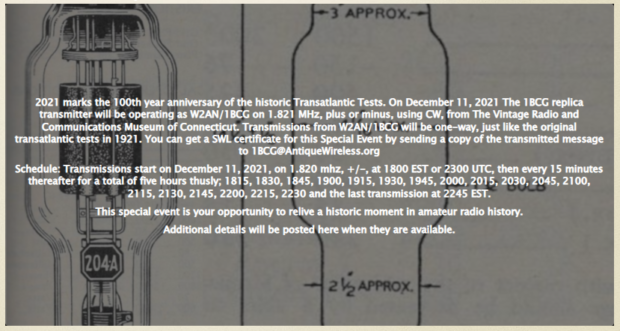 In 1921, on December 9, 10, 11, radio amateurs who were members of both the Radio Club of America (RCA) and the American Radio Relay League (ARRL) successfully spanned the Atlantic Ocean for the first time, from the United States to Ardrossan Scotland, with Morse code signals. Not only were the signals heard in Scotland, but also in Amsterdam Holland (3600 miles), England, Germany, Puerto Rico, Vancouver British Columbia in Canada, Catalina island California (2470 mi.), and the State of Washington.

The transmitter on the U.S. side, station 1BCG, was located in a 10 ft. x 14 ft. wooden hut in a farmer’s field in Greenwich Connecticut. The transmitter had an input power of 990 watts, a T cage antenna, 100 feet long and 70 feet high with a radial counterpoise, and the wavelength used was 230 meters (1.3 MHz).

This Transatlantic Test Project, which was conceived of by radio amateurs, proved that even with modest equipment, the Atlantic Ocean could be spanned with shortwave signals, opening up improved communications for many more purposes. These ”short” wavelengths below 200 meters had been considered useless by commercial and governmental interests, resulting in the Radio Act of 1912 banning amateur activity in the wavelengths longer than 200 meters. As a result of the successful efforts of radio amateurs in Transatlantic Test Project , over the last 100 years many experimenters and inventors became focused on continually improving wireless technologies and devices. The direct results of that inventing are the smart phones, smart watches, smart TVs, wireless Internet routers, GPS tracking devices, and Bluetooth headsets, all of which depend on wireless technologies. Those pioneers 100 years ago could never have envisioned the way society has been enabled and transformed by wireless!

2021 marks the 100th year anniversary of the historic Transatlantic Tests. On December 11, 2021 The 1BCG replica transmitter will be operating as W2AN/1BCG on 1.821 MHz, plus or minus, using CW, from The Vintage Radio and Communications Museum of Connecticut. Transmissions from W2AN/1BCG will be one-way, just like the original transatlantic tests in 1921.

You can get a SWL certificate for this Special Event by sending a copy of the transmitted message to 1BCG@AntiqueWireless.org

Info via NORDX via WOR