The end of August brought some ES stations and the number of logs reach 400 total. More than 100 of those stations are new-for-me, so the season can be considered a good one (using only one receiver, no SDR). Magical Tropo Day 26 August will be written in Finnish FMDX History – guys on Southern Coast heard numerous new countries! Czech Republic is not common catch but it all started with nice regional stations caught by many listeners in South and South-Western Finland. Soon they got Austria (many transmitters), Slovenia 88.5 by MB and in the end Croatia (Zagreb and Ivanscica transmitters!). The new Finnish tropo record is 1691 km by JJJ Mynämäki. Congratulations to everyone! Also Slovakia was heard for the first time by ducting. Other logged countries were Belarus, Denmark, Estonia, Germany, Latvia, Lithuania, Poland, Romania, Russia and Sweden. HNG, KAL, NOR and UKR have been heard earlier in Finland by tropo, but those countries were not logged that day. Now total is 23 heard countries by Tropo. Unfortunately these conditions didn’t reach inner Finland, so the longest was Suwalki 105.5 from here.

On Sunday 28 Aug ES season was completed with nice OIRT opening, mostly to Kirov and Perm. Surprisingly Radio Rossii stations have regional window till 0800 UTC on sunday mornings. Regional programs were on air already at 0730, possibly they started at 0710 UTC. 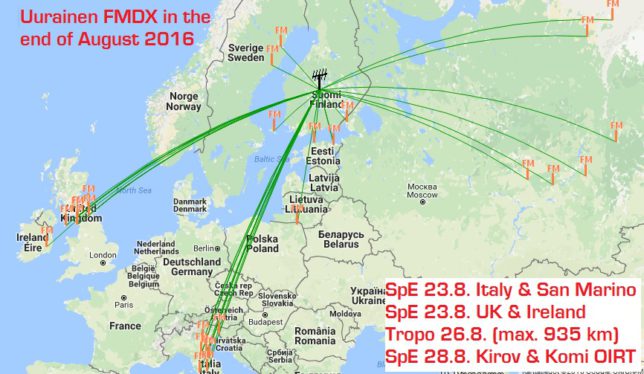 Based on total number of my personal QSLs, some statistics on ”most important countries and languages for FMDXer”

If we look at the map, the result can be explained geographically. Bigger the country is, more conditions will be favorable to this area. Only CZE and SRB are smaller countries among the list, probably stating that those countries have a relatively good number of local stations to listen to..

FM season seems to be closing, it is time to concentrate on AM – especially TA signals. Lattemiele played a song (23082016) that suits pretty well for this time of year.