Give Me Hope, Esmeralda 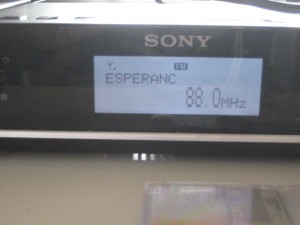 The morning dawned still windy and cold (+9 C). The wind had blown away the reflector of our OIRT antenna, otherwise the antennas had stayed in place. After a refreshing morning jog around the island (6 km) we saw a red cargo ship approaching us with the name KESS painted on it. Was it a greeting from our dear friend Es? It seems so, as 0700 UTC Sherlock’s MUF map started looking interesting.

The band opened at 0727 with a brief Spanish opening in two intervals, followed by a Balkan opening focusing on Bulgaria and Thessaloniki but only reaching 94 MHz. The best part of the day started at 0945 with a rather good French opening up to 108 MHz that lasted for an hour or so before starting a hanging “hiccup” situation of some French and Balkan stations coming and going. Portuguese stations were also heard on some frequencies, but the mystery remains whether they were real or just immigrant services from France.

Now at 1357 Sherlock looks promising but the band is empty. Everybody’s drooling for more…