This morning we got an opening to Southern Italy (Puglia & Abruzzo) and Balkan (Croatia). First alarm SMS arrived around 0550 UTC (TNX IKA!), so I moved laptop and XDR to the balcony as the first thing in the morning. While having coffee I beamed all my 4 elements towards Italy. At 0607 UTC on 95.9 MHz  I saw a strange RDS RADIO_TG. There is a BIH station using this code, but not on this FQ. Anyone knows? The station could be from everywhere, it was playing at least 4 English pop songs in a row. No audio ID heard.

After that I realized the name of the game. Radio Italia Anni 60 gave local ad for Puglia/Basilicata, on 95.7 and soon after that 96.1 was talking about the first wedding ceremony in the prison of Bari. Stations were heard up to 108 (JJH got Radio Norba Bari local on 105.5!) but the signals were only few – the most of the skip went obviously to the Adriatic Sea.

Later some croatians from Labinstica transmitter in the same time with Foggia on the middle band – these are linear from this point of view. Also one mystery: On 93.6 a reporter said ”Radio Vaticana” in the end of his report – no CVA listed on this FQ. However, during this summer I have noticed more skips over 2000km than ever. I don’t know if it was a special character of this season – or did the huge forest block all the long skips which have to arrive very horizontally. However Istanbul, Bari, and Brest,all heard properly for the first time this year, are around 2400km from here. 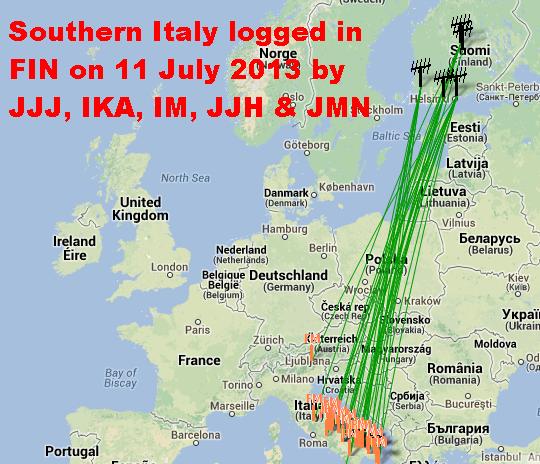 And all the stations heard this morning by same DXers: 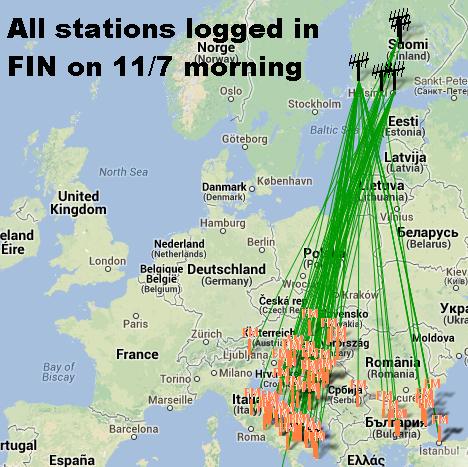 Here’s my personal log of identified stations. Please note, in some cases TX site is a guess if there are more than one tx operating on a certain FQ.