After a silent week, finally something heard on Saturday night. Forecasts said there have been Aurora Borealis (northern lights), which can reflect signals too. Unfortunately the audio shouldn’t be clear. I have never heard any station during these so-called Aurora conditions, so I don’t know exactly what it should be. On 93.8 I noticed a Swedish speaking station, but it was only a tropo scatter reception from Skellefteå (P1 337 km). DX maps showed skip from FIN to Northern pari of Russia, but what I get was weird Nordic language on 87.7. That´s Iceland with a back lope (RUV Rás 2 identified with it´s news tune)! After turning antenna 180 degrees opposite I checked memories of XDR. Luckily 93.8 was saved (because of P1!). It gave strong sea weather report in Icelandic and have to be RUV Rás 1 Háfell (14 kW), which I received last summer too. Quick check to the FM list – there should be Bylgjan from the same tower on 94.5, but only 2 kW. Surprisingly I heard weak English pop music and the reception got even better during the jingle: ”bylgjan.is”! I don´t know whether this was Aurora-Es or normal Es, but I’m very happy of catching for the first time a commercial station from Iceland, because it is pretty difficult direction for me. Till the last summer I thought it would be impossible because of high pine trees on that direction (if they would be my propriety, they would be already cutted!). For your curiosity, by clicking the station name you can open mp3 link. That´s all of the 20 minute conditions! 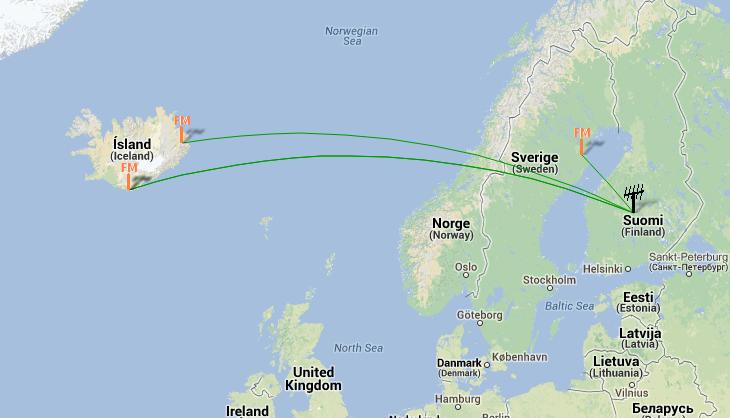 As fellow blogger JMN wrote there was quite interesting propagation on Saturday night. Aurora signals are characterized severe distortion which was noticeable in FM band on this night. Geomagnetic activity in Hankasalmi magnetometer measuring station (HAN) was: High, so conditions for Aurora was quite good. I registered some weak signals especially in 94.3 MHz but couldn’t identify station but strongly guess based on language I heard is Iceland. Anyway this is only lucky guess cause signal was very weak and flawed.